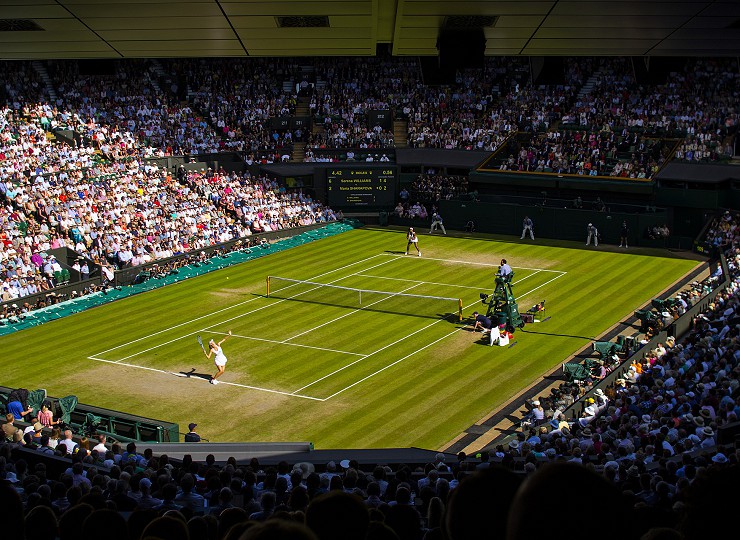 Mention the annual Wimbledon tennis tournament and most people think of strawberries and cream, pristine green tennis courts and cheering on their favourite player. But even the historic and well-tended environment of the All England Lawn Tennis Club (AELTC) is subject to problems with litter.

This year, the tournament’s management have joined the crusade to reduce plastic waste after reports of rubbish-strewn grounds in 2018. Images showing piles of litter left on the courts were posted on social media last year, causing fans to voice their dissatisfaction with the amount of waste generated by the championships.

One of the tournament’s sponsors is bottled water company Evian who are piloting a new bottle made from 100% recycled plastic at Wimbledon 2019. The move is part of a pledge by their parent company to ensure that all its packaging is both recycled and recyclable by 2025. In addition, the Evian logo will be replaced by the slogan “I recycle” on all the players’ water bottles.

Tournament organisers have also increased the number of recycling bins around the club’s grounds to improve on-the-go recycling rates. Other measures include appointing “eco champions” to encourage spectators to ensure that they are disposing of litter responsibly and recycling where possible. The initiative is being overseen by UK-based environmental charity Recoup. In addition, players will no longer receive their freshly strung rackets wrapped in plastic. It’s estimated that this move alone will save around 4,500 plastic bags during the two-week tournament.

What can sporting venues do?

The All England Lawn Tennis Club is part of the UN Sport for Climate Action initiative, which encourages sports events to show “climate leadership” by tackling their environmental footprint. Richard Lewis, chief executive of AELTC, said: “As a signatory to the UN Sport for Climate Action framework, we know that sport has an important role to play in tackling the challenges of climate change and that in order to drive change, action is needed.”

Plastic straws were banned in Wimbledon’s bars, cafes and restaurants for the first time in 2018, while 87 free water refill points were installed along with 21 water fountains.

A need for litter bins and recycling facilities

Amberol’s MD Patience Atkinson-Gregory is pleased to see that the sports and leisure sector is showing an awareness of the need to tackle issues such as waste and recycling. She comments: “It’s inevitable that places with high footfall such as sporting tournaments will generate litter. What’s important is that sporting bodies and event organisers work together to try and tackle this issue.

“Obviously if the weather is warm, spectators need access to water and providing fountains is a proactive way of combatting excessive use of plastic bottles. I also hope that other sporting events follow Wimbledon’s lead and invest in providing more recycling bins and facilities to encourage on the go recycling.”

The UK’s largest music festival Glastonbury held during the last weekend in June, recently became the biggest event to date to ban single-use plastic bottles as part of a drive to reduce the mountains of waste left behind by festival-goers every year.

Amberol manufacture and supply a range of outdoor recycling litter bins that are used for on-street recycling at source. Litter bins such as the Olympic Dual Bin and the Chatsworth Bin are used at sporting venues, theme parks and public places to help reduce landfill. Banks of outdoor recycling bins are ideal for places such as shopping centres and car parks to improve on-the-go recycling rates.

For more information about the Amberol range of indoor and outdoor litter bins, email sales@amberol.co.uk or call 01773 830 930.